«In partnership with Sovereign Rarities Ltd, Numismatica Genevensis SA. is pleased to introduce an exclusive new Royal Mint series of proof gold and silver coins: City Views». This range pays homage to the historic European Thalers of the 16th-18th centuries, famous for their depictions of elevated views of the beautiful contemporary cityscapes. The new City View series from the Royal Mint celebrates breathtaking views of iconic urban landmarks around the world renowned as cultural marvels. They will be issued in low mintages of proof 1 Kilo, 5oz, 2oz and 1oz in both gold and silver. 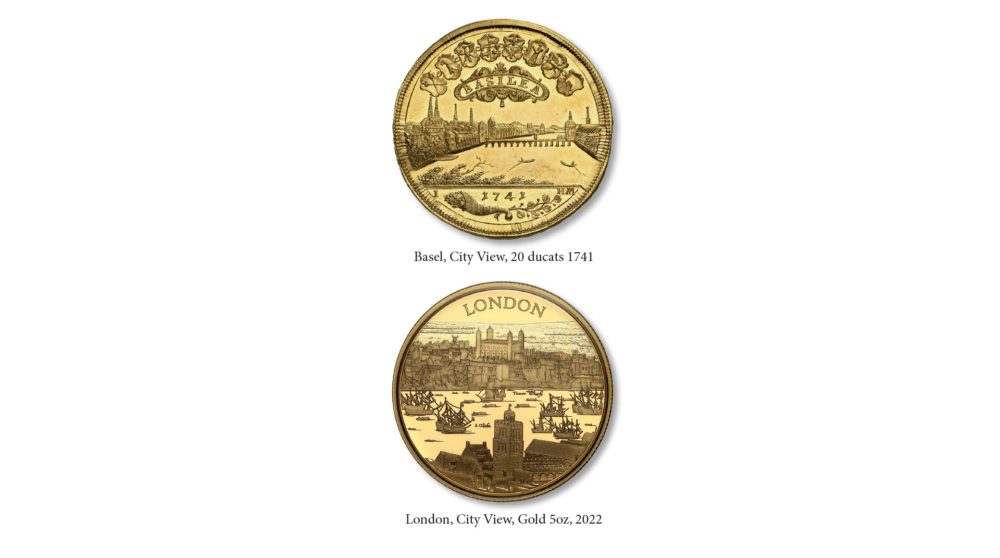 The first coin in the series focuses on the City of London, home of the first Royal Mint. The London City View Coin features a panoramic historic view, including the River Thames and the Tower of London dating from the 17th century. As an iconic symbol of the last military conquest of Britain, its construction had a profound impact on the national culture and language while forging closer ties with mainland Europe.

An etching by Wenceslaus Hollar (1607–77) inspired the reverse design that appears on the coin. Born in Prague, Hollar was a prolific artist who came to London in 1636. During the English Civil War, Hollar fought on the royalist side before moving to Antwerp for a time. Hollar’s body of work comprises almost 2,800 prints, paintings and drawings, and his views of London form a vital historical record before the Great Fire ravaged the city in 1666.

Viewed from any vantage point, London sprawls in all directions, revealing its layered history. One of the world’s oldest great cities, it has been perpetually reshaped by the restless energy of its citizens, and today you will find ancient monuments and modern skyscrapers standing side by side, as tall, steel-framed towers have redrawn the city’s skyline. However, for hundreds of years, the Tower of London dominated the area that has now become London’s financial district.

Available from Numismatica Genevensis SA in 1 Kilo, 5oz, 2oz and 1oz in both gold and silver, each London City View coin is struck by the Royal Mint in proof format to an extremely limited mintage.

A new City View Coin, featuring a different historic city around the world, will be released every six months. Limited mintages will be available. The program pays tribute to historic City View coins struck around Europe centuries ago, amongst the most beautiful, detailed and sought-after coins in existence.